The Gates of Berlin

First of i would like to thanks all of these guys who without it would have taken me forever..why do credits always go at the end ?

All missions, research and FMB work by myself. 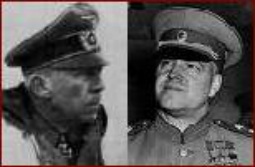 The Battle at Seelowe Heights ,part of the Oder-Neisse Battles,was the last major battle between the Soviet and German armies.The Germans had been on the retreat since Stalingrad in 1942 and now had their backs against a wall facing a determined enemy led by Georgy Zhukov in the East,and the combined  allied forces in the West.

Heinrici had been placed in charge of Army group Vistula in March and layed defenses along the Oder ,the main emplacements being on the Seelowe Heights so as  to overlook the front.These defenses consisted of  anti tank ditches,gun emplacements and and an extensive network of trenches.

After many probes by the Russians,the storm broke at 4.00 am on April the 16th.Within half an hour a half million shells had fallen on the Germans armies,noisy and spectacular,but not as effective as the Russian commanders had hoped.Heinrici had anticipated the bombardment and pulled back the bulk of his troops into two defensive lines in front of the heights.

The Russian armies advanced until well in range of the German artillery which opened up and stopped the advance in it's tracks.Swampy ground,created by German engineers who had flooded the Oder plain by releasing an upstream reservoir,mired down tanks and troops making the initial attack a disaster.

Zhukov threw in his reserves that were to held back for the breakthrough as well as ordering more armoured forces to the area.This created a huge traffic jam and thus immobilized the bulk of Russian armour while while the troops at the front were chewed up by the German artillery.

However Heinrici did not have things all his own way as Russian airstrikes were destroying his artillery on top of the heights and his troops were taking serious casualties themselves.By the end of the first day Heinricis lines at Seelowe were intact and Stalin was chewing out Zhukov.Attacks to the south of this battle were fairing a lot better.

Day two was a slugging contest with the weight of Russian troops,armour,artillery and aircraft making itself felt.The Luftwaffe attacks were a mere prick in the Russian Bear,damage done to the Red Armies bridging positions proved futile as it was quickly repaired.By nightfall on the 17th the Seelowe front was battered but still unbroken.

On the third day Zhukov continued to hammer at Seelowe Heights and Heinricis defences were eroding.He still mantained his position on the heights but owing to losses and lack of replacements the position was becoming untenable.The Luftwaffe was virtually grounded owing to a lack of fuel but still sortied and caused casualities out of proportion to the odds it faced.

April the 19th finally saw Zhukov break through the Seelowe front area leaving some German pockets to surrender or be wiped out.This left the run to Berlin (90 kilometres westward) open.Berlin was encircled by the 23rd of April.This last battle cost the Russians over 30,000 men and 1000 tanks,the Germans 12,000.The simple mass of assualt had ground down the defenders.

This campaign has been made 'based' on a historical battle that took place in Germany in April of 1945 and using the excellent il2 series of simulator pc games patched to current version pe2.

Imagination has also been used to try and provide a mix of history and an element of enjoyment.

It is not entirely realistic insofar as the plane you will be flying but i have recreated the correct frontline positions day by day as far as i could research,typical air to air and air to ground events,Luftwaffe units operating from Autobans and included briefings based on the days events occurring April 16th 1945 to April 22 between the German and Soviet armies.

The plane you will pilot will be the Dornier 335 ,dubbed Pfiel(arrow) by the German test pilots.

Plagued by mechanical unreliability and lack of aviation fuel,the operational carrer of the Do 335 is very obscure.But lets not let that get in the way of good fun and immersive flying.Rivet counters beware.

You will be one of the last of the aces assigned to a unit much like JV44 ,colorful for recognition ,having to operate from obscure Autobhans and wooded areas much like the Luftwaffe in its last months.

It is intended to be not a get in ,fly and shoot series of missions, but to try and recreate insomuch as the game will allow a feeling of the hopelesness of the situation faced in the last weeks of the Eastern Front battles.

I chose the Do 335 because it is one of those like the 262 that was fouled over from the beginning but promised so much.Plus it looks damn cool and performs well within its envelope.

This is one of those rare campaigns that almost qualifies as a Work Of Art. It's extremely imaginative and well-designed, featuring an excellent template and well-chosen weather conditions, and has some very clever mission scenarios. Just getting off the ground is sometimes an achievement, but is never less than enjoyable.

The only small aspect of the mission design I didn't like was that the waypoints were sometimes placed too fussily close together, which actually makes navigation by waypoint compass rather difficult.

I'd like to have given this full marks, but a couple of small errors prevented me. In mission 9, an error in the flight allocation puts you in an Me262 flying overhead, and in mission 5, a target left over from the last mission, far away from your route, makes the mission very difficult to complete.

That aside, this is a must-play campaign. It is a uniquely innovative and visionary piece of work that impressed me immensely.

I really enjoyed this campaign, got attention for detail and a nice skinpack is included. The takeoffs add a lot to immersion, for example I instantly delete a campaign if the airfield is empty or theres no ground action at all. I can recommend it everyone, its got the right amount of added objects and action. Please do more campaigns if Your time allows...

I played it on 4.08m, everything worked fine.

I absolutely loved how you incorporated secluded/hidden landing areas as it really enhanced the feeling of desperation for Luftwaffe "end of days" activities. I've read about this in various books so it was cool to actually see someone make a campaign including it. I would definitely like to see more of this type of hidden airfields in late war Luftwaffe campaigns.

Flying across bombed German airfields, scattered debris fields, and the Battle of Seelowe Heights was astounding.

The Do335 was also excellent to fly (one of the first campaigns I have flown in with it). Fast, powerful, and pleasant to look at, it really packs a punch. My end results were 19 aircraft kills and 60 ground kills.

take off and landing for the experten

this is great!
the seeting of the airbase in the woods is a masterpiece!
the takeoffs are a great challenge although not completely mad. as commander i wold have ordered some additional trees cut;)

this is one thing I noticed: the trees on the right at the beginning of the take off run seem to have a larger "invisible" boundary than the ones on the left which seem much closer to the strip. though, nevertheless they are more harmless so keep a little to the left! i got lucky right at my first night attempt but had to experment a little at daylight.
I am a very bad fighterbomber but I love the arrow as a fighter!

Thanks for putting this together;
take offs and landings are a blast!

Loads of innovative stuff but not for the impatient. Simply taking off in Mission 1 is an achievement.
Great fun - give it a try.

Flying the Do335, fast and low against ground targets or high above the clouds to intercept enemy bombers is a regarding experience in this campaign. Really nicely done 'airfields' and good inmersion, with a history background as well.

Fly the campaing, you'll not regreat it!

Great Campaign.
Just a quick note: I was able to fly it also with FB+AEP+PF merged install with patch 4.04m (so it seems that 4.05m is not an absolute requirement)