Setting the compass in CloD 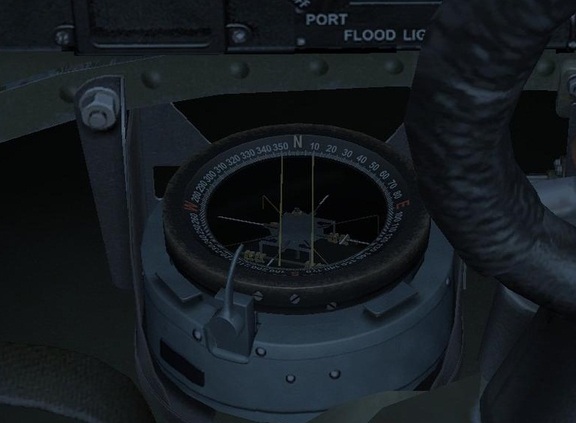 A lot of people seem to be baffled by the compass and where they are going. Here's a try at showing how to.set the darn thing.
Mind you, I'm no expert, I made it work like this for me and that's it. I just hope it helps anyone interested.......

First of all, we see the compass like this on start up 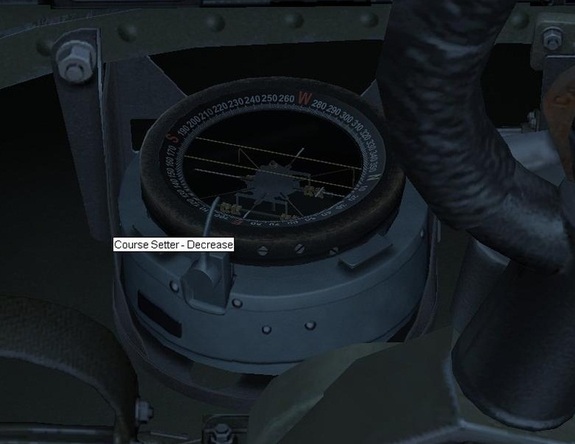 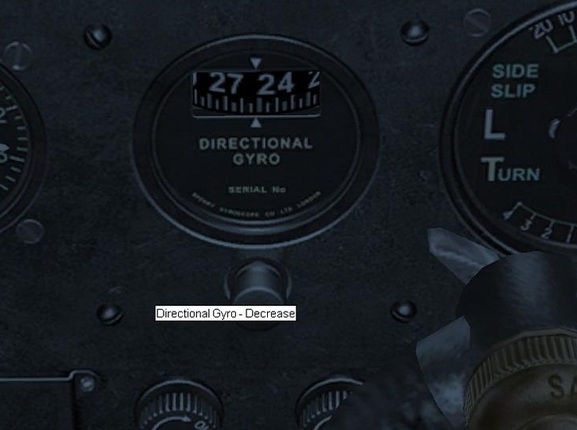 On the screen somewhere in the info window you will see the degrees counting up or down. Read the last line of degrees (in this example its 252) and set that in the Directional gyro.
Again you will have to up or down the degrees until it reaches the just found setting. In this case 252

You are ready now. Fly on the Directional Gyro, but be aware the DG is quickly off. So repeat this procedure once every 10-15 minutes or after violent moves. Make sure the compass (the magnetic one) is steady before doing this, so trim your aircraft.

I hope this helps people.  Bando

There's already a "look at the instruments" command in the controls setup of the sim: you map it to a button and you get a view of the instrument panel (regardless of whether you use head tracking or not, it over-rides everything) for as long as that button is held.
There's nothing wrong with the compass, it's realistic. All we need is a "look at the compass" command or a "look at instruments part2" command (so that non-RAF aircraft can benefit from it too, for example, it would be cool to fiddle with radios while in the gunner position of a Ju88/Me111/etc if and when they get implemented) that works the same way: lock view to compass as long as the key is held down.


In the meantime, i've found out a way to reliably calibrate it in flight without losing control of the aircraft. Move your viewpoint (via head tracking or regular mouse control) so that you are looking at the lower half of your instrument panel and left of the stick (it's like leaning left and down into the seat). This leaves a bit of visible horizon so that you can stay level and you have all the major instruments in view.

From this position you can clearly make out the alignment of the white compass bars and the yellow course setter bars, we just need to know which part of it is north. Momentarily go to zoom view/narrow FOV to identify where's the T-bar on the compass and the North marker on the course setter, now you now which way to turn it. Zoom back out and apply the relevant command while you still have a sufficient amount of forward view and all the main instruments in sight helping you maintain straight and level flight.

Absolute precision is not necessary, getting it within 5 degrees or so is just fine for the distances we fly now. On longer trips (eg, a cross-channel Rhubarb) we'll have to recalibrate anyway once identifying a ground landmark to correct for possible wind drift over the channel.

It's not optimal but
a) it works reliably and well
b) the aircraft of the time weren't ergonomically optimal either, many of them weren't even optimized in that regard
c) if you want cool automatic stuff, fly a lufty plane

Finally, if someone complains about being unable to do this drill during combat the answer is "you are not supposed to". I check it every 5 minutes or so during cruise and it never strays for more than a couple of degrees. By the time i'm in the "danger zone" i know it'll all go awry due to the gyros tumbling from the maneuvers in the dogfight so i just stop thinking about it. If i need to disengage in a hurry i know i need to go north: just turn until the cross-bar is at the top and you'll be going north. Then i recalibrate it once i'm out of the woods.

I really like all such complexity in all aircraft of the sim, it gives me a greater feeling of immersion by "muddying the waters" a bit: i can't calibrate my DG mid-combat so i'm high-tailing it out of the combat area on an approximate heading, possibly while low on fuel and/or with some damage.

I bet that after a while it's exactly this aspect of the gameplay that will get the most praise. It reminds me of when i started messing with silent hunter 3 way back in the day. I saved very often and loaded my saved game whenever the escorts pinged me. Before long i was sinking massive tonnage, i was the Kriegsmarine's wonder boy...and i was bored and stopped playing. After picking it up again at the instigation of a friend, i deliberately provoked a detection of my U-boat by the DD escorts and started playing through the evasion phase. I realized i was missing half the gameplay up until that point.

Uncertainty and a feeling of slight helplessness in simulators (as in "this is over my direct powers at this point in time") is what turns ordinary happenings and predictable successes into great gaming moments and heroic feats .
Powered by